Outlining a broad policy agenda to improve Ohio’s courts to better serve the people and pledging to uphold the rule of law and to protect the rights of all Ohioans, Ohio Supreme Court Justice Jennifer Brunner today kicked off a statewide tour in her campaign for Chief Justice leading up to Election Day on Nov. 8. Early voting is already underway.

“With wide-ranging endorsements, record-breaking fundraising, and public and private polls showing this is a dead-heat, we are building momentum toward victory on Nov. 8, but we need our supporters to turn out,” Justice Brunner said. “We are touring Ohio to get out the vote to ensure that our courts belong to us, because justice matters for everyone.” 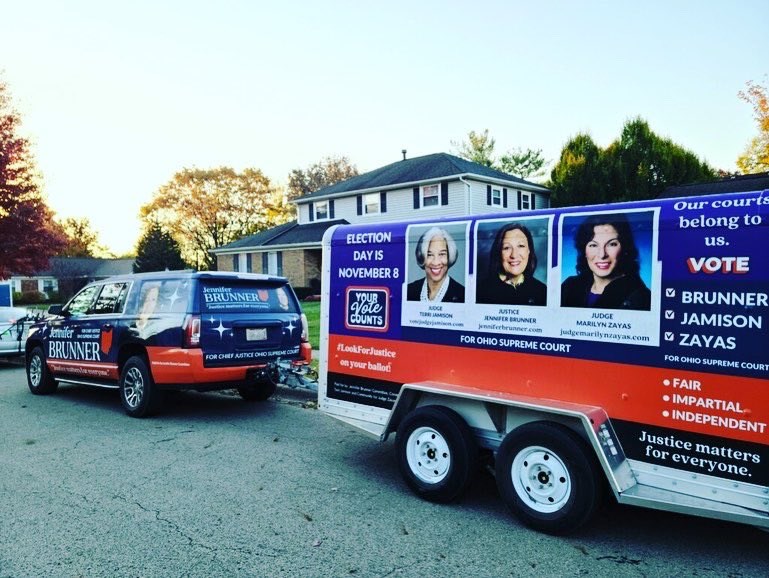 “As your Chief Justice I will be fiercely independent, fair and impartial; I will protect the rule of law and safeguard your rights,” Justice Brunner said. “This past year, I have met with people in every corner of Ohio and laid out a plan for Ohio’s courts that includes creation of a Task Force to establish a Commission on Fairness and Equality in Ohio’s Courts and Legal System, completing the implementation of the Criminal Sentencing Database, expanding specialized dockets, establishing an Environmental Justice Task Force to examine legal issues relating to changes in our climate and weather patterns, growing the use of technology in our courts, and supporting judges and local courts in addressing the opioid epidemic. As your Chief Justice, I will work with community leaders and elected officials to further these plans.”

Organizations from a range of perspectives representing millions of Ohioans have endorsed Justice Brunner for Chief Justice.

Most recently, a group of 18 Ohio retired and former judges announced an initiative to support Justice Brunner for Chief Justice. The retired and former jurists come from rural and urban communities, from courts at every level of the judicial system (trial, appellate and Supreme Court) and together have more than three centuries of experience serving the people of Ohio in the administration of justice.

The Ohio Constitution provides that the Chief Justice has the responsibility of superintendence of the Ohio judicial system according to the high court’s rules.  Brunner is the only other member of the court other than the current Chief Justice Maureen O’Connor, who holds experience managing a statewide office and network of local offices throughout the state, as Ohio’s 52nd Secretary of State.

Previously she served as a judge of the Tenth District Court of Appeals and the Franklin County Common Pleas Court. As a trial court judge, Brunner founded the county’s adult felony drug court, known as the TIES (Treatment is Essential to Success) Program, now in its 18th year of operation.   She served as Ohio’s first and only female Secretary of State from 2007-2011, being awarded the John F. Kennedy Profile in Courage Award, the nation’s most prestigious award for elected public servants.