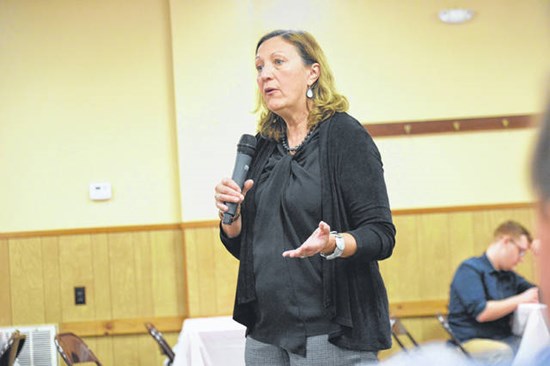 “David Pepper (Ohio Democratic Chairman) came to me and asked me if I’d run against Judi French for the Supreme Court,” said Brunner. “Personally, it was a tough ask. From the standpoint of should I do it, there was no question that I should do it. I looked at what was coming up ahead.

We got a new census in 2020. There will be a new way to draw district lines. You all maybe remember voting for a constitutional amendment, so it’s based more on a formula than just politics and computers. I thought, wouldn’t it be great if we didn’t do it a republican way or a democrat way but that we were just fair…The question became ‘how could I not do this?’”

Brunner referenced the importance of courts serving as a legal “backstop” to corruption. According to a press release, “Brunner has assisted foreign governments with rule of law and self-governance matters, including anti-corruption and judicial reform consulting in the Republic of Serbia, election observation in the Arab Republic of Egypt and providing legal training in the Socialist Republic of Sri Lanka.”

“You may have heard about some of the foreign work I did,” continued Brunner. “When I went to those other countries, I was a rule of law expert and I saw what happened when you did have corruption…We don’t want our country to become like this. I’m happy that I’m a judge and I’m happy that it’s my task and my job to conduct myself in such a way that people will hopefully find integrity in what I do and believe in the rule of law.”

Spears was invited to address the gathered next.

“I want to be your next sheriff in Gallia County because I believe there’s room for improvement,” said Spears. “I’ve got 48 years of experience (in law enforcement). I started out in Erie County in Sandusky, Ohio, in 1970. I was with Gallia County 26 years and three months when I retired last year and what’s bringing me back out is the conditions (with what is) going on with our jail and within the county…My big thing is training…I’m a certified school resource officer. I had programs going in the county. I had six neighborhood watch programs. I had two or three senior programs and one for Alzheimer patients…If I get elected, I’ll do my best to turn that sheriff’s office around and bring respect to the people of the county.”